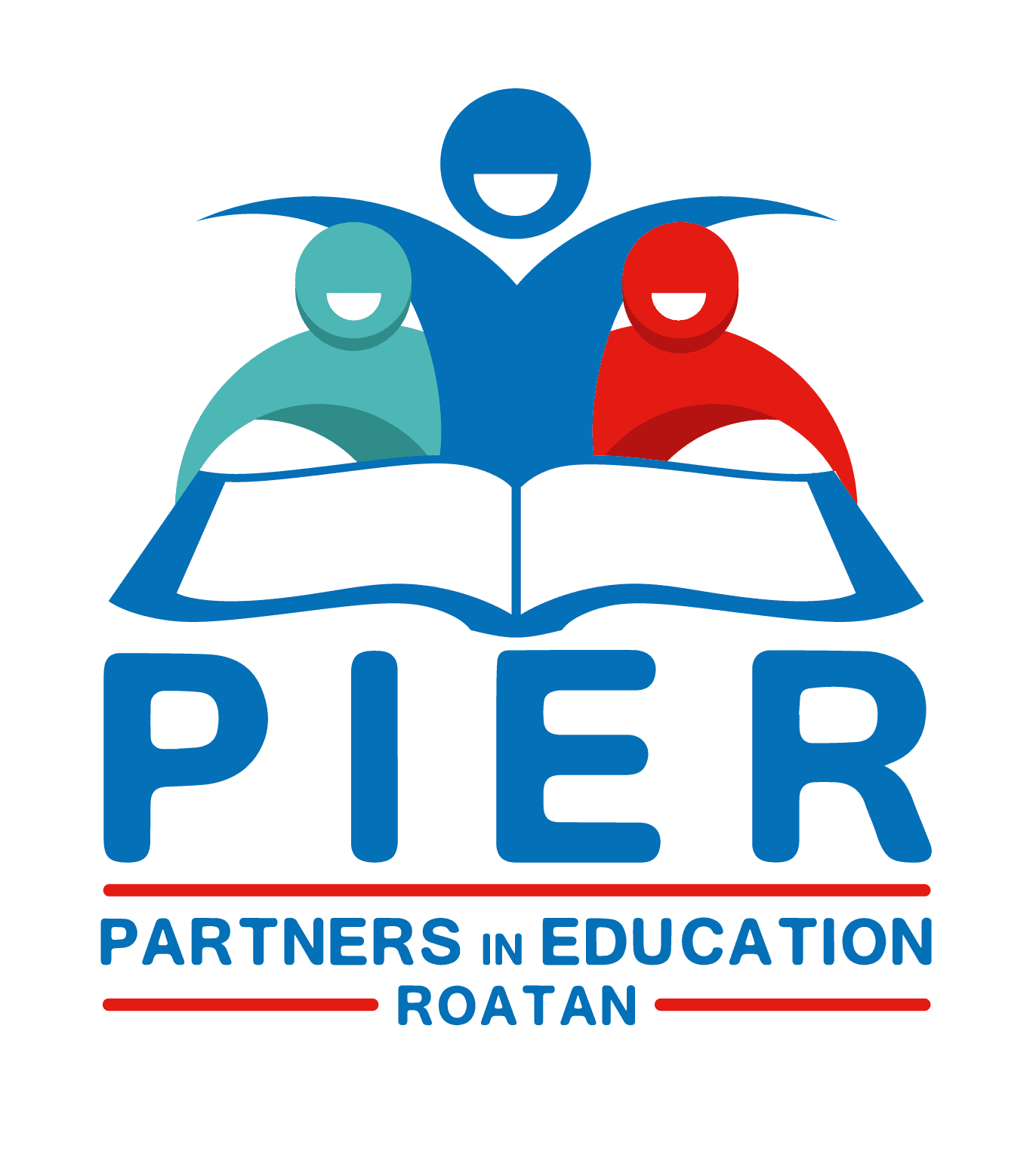 Barbara is a resident of Roatan having moved here in 2006.  After a long successful career in Corporate America, she retired early to pursue her dream to build an eco-lodge, and Upachaya came to be.  Growing up on a farm in rural Wisconsin, she was raised with the premise that Community is family and one should do what they can to nurture that relationship and give back whenever possible.  Barbara has a son, Nathan who has followed in those footsteps and is a gifted Teacher of Music and a spirited and inquisitive granddaughter, Fiona.
Bill Figgess

Bill was born in England and called many places home before he and his wife settled in California. He has over thirty-five years experience in education, ranging from math teacher, to principal, to superintendent of schools. After coming to Roatan in 2010, I found out about PIER and wanted to become part of a dynamic organization that was helping public school students with their learning. I felt that my background in education might be of use to PIER.

Cesar is a Honduran attorney and has lived and practiced law in Roatan since the early 2000's. He has also been a member and founder of some of the most important Health  and Education NGOs on Roatan, with a special interest in the STEAM education platform.
Daine Etches

Daine was born and raised on Roatan and found herself immersed in education early in her family life. As she describes it:
"Back in the late 70's, as a result of an ultimatum from my husband, Bill, to find an alternative to the local Spanish school, along with my English friend, Kathy, who at the time was teaching her daughter Natalee using the same Calvert home schooling  program we were using to educate our children, Aaron and Shannah, resulted in bilingual education on Roatan. Together, Kathy and I started to include other local children in what later turned out to be the first bilingual kindergarten. Before long, Bill and I moved to Canada, leaving our home to house grades kindergarten, one and two.

Once our school was up and running, Sherry Arch started what later became known as Children's Palace in French Harbour. Not long after the Church of God bilingual school was launched, the Methodist Church school in Coxen Hole followed. As it turned out, by leaving to live abroad, others took the little school over and ran with the idea resulting in what has become the many choices available to children from all over the island for bilingual education.”
Debbie Curd

Debbie is married to Blake and has three grown children. She has been coming to Roatan for about seven years and they have just recently purchased property. She’s a former pediatric nurse and also worked as a preschooler/kindergarten physical education teacher. She looks forward to doing what she can to help promote and execute the PIER vision and mission.
Delvin Merino

Delvin was born and raised on Roatan and now lives in French Harbour, Roatan. All of his pre-university education was obtained on the island and he went to the mainland of Honduras to complete a technical Computer Program and a university degree. His current time is spent in a wide variety of educational pursuits: he is the principal of a public school, director of the Merino Education Center, as well as very involved in the local municipality in the role of councillor. Educating the children of Roatan is a high priority for Delvin and he sees PIER as one of the many opportunities we have to improve education and consequently the welfare of the island's people.
Jim Storey

Kelley has been a resident of Honduras for the past three years. She and her husband, Jim, both fell in love with Roatan over 17 years ago when they first visited the island for vacation.  Although she and her family are not on the island full time, Kelley is passionate about helping the children of Roatan foster their creative and selfless spirits through creative learning. Kelley spent her 30-year career in healthcare technology and holds a BS Degree in Health Information Management, as well as a MBA.  Kelley is now retired, but during her career, she spent years with companies like Oracle, McKesson and Infor, helping health care organizations solve their technology challenges.  Kelley will bring her expertise to PIER to help create a digital learning platform that provides the children with skills needed in today's world.  She has also served on Dalton State Community College's Healthcare Advisory Board.
Milesse Kennedy

Born in Alaska into a pioneer family, Milesse also lived on Maui and Seattle before retiring to Roatan with husband, John, in 2002. Together, they developed the boutique property that became Barefoot Cay Resort on the south shore of Roatan. Milesse “grew up” in the Alaskan family business and came to treasure small town connections and values. She currently serves on the boards of PIER, the Bay Islands Tourism Bureau and Lawson Rock HOA. Milesse has a daughter, Wendy, two granddaughters and a grandson.
Mitch Cummins

Mitch is the owner of Paradise Computers on Roatan. Paradise Computers is the premier technical company on the island and is responsible for much of the early development for IT and communications infrastructure on Roatan.
Mitch was on the "Mayor's Commission For Education" in 2007 - 2008. That commission was tasked with studying the education system on the island and come up with a way to improve it. While the findings of that commission were not implemented by the government, several of the members of that commission became the founding members of PIER.
Mitch has recently come back onto the board of PIER and is looking forward to using his knowledge of technology and social media marketing to move PIER into the future.
Patrick Connell, MD

Patrick is a board certified Emergency Physician currently working in a large academic teaching hospital in Phoenix Arizona part-time. Since 2005, he has devoted half of his time to work in the developing world, mostly in Honduras and three recent stints in Chad and Mozambique. He has been working with PIER since its inception in the crab races at the old Bay Islands Beach Resort. He also works with a young lawyer in Tegucigalpa to mentoring young women, in an effort to encourage them to pursue university level training.
Trish Nixon

Trish was introduced to PIER in 2015 when a walk down Sandy Bay Beach led her to the home-base of the organization. She and her husband owned a condo not far from the Sandcastle Library and she had always wanted to learn more about the facility. Cam O’Brien- the founder of PIER -was working in her office and enthusiastically described the programs PIER was involved in and detailed the organization’s plans for the future.
Developing educational programs for school students was a big part of Trish’s work with the conservation-focused Peregrine Fund in the United States. When she learned of PIER’s plans to offer “Science Friday” classes to Roatan’s students, Trish decided to join PIER when she and her husband moved to the island full-time.
In 2016, Trish and her husband, Fred, relocated to Roatan. In a matter of weeks, Trish became involved in helping with various fundraising and special projects for PIER. Trish strongly believes in the power of education to open the doors of opportunity for Roatan’s children and looks forward helping PIER as it strives to improve public education for Roatan’s students.
Vivinni Figgess

After spending a number of wonderful years with her own family in northern California, and working there as an elementary special education teacher, Viv found that retirement life in Roatan was simply amazing. The educational needs of the island are many. The children of Roatan are truly hungry to learn! And PIER has become a focal point for a group of like-minded people, Honduran and ex-pats, who wish to respond to the eagerness of the children and who love the promise of education.
Yvonne Heilijgers

Yvonne is involved in PIER because one thing is very clear to her - without education the kids of Roatan have no chance of a better life than their parents had. She travels a lot and her hobby is taking pictures of people and to tell their story through images.
She hopes that she can help the kids to tell my “story”.